PATIENT STORY - Stand Up To Cancer 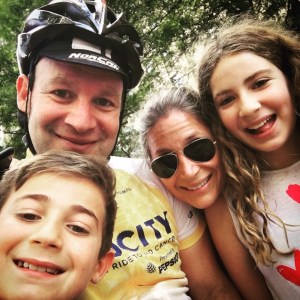 That’s how Doug Rozen characterizes his cancer journey, which began three years ago with what he sees as a lucky break.

An avid cyclist, Rozen started experiencing some discomfort, which he blamed on too many hours sitting on the saddle of his bicycle. While a subsequent medical exam seemed to indicate nothing was wrong, his doctor suggested that Rozen – who was only 42 at the time – have a colonoscopy. That fateful advice helped to save his life.

While his luck came from having a doctor who sidestepped the norms and took a proactive approach, Rozen believes a life-long positive attitude — he was called the “Sunshine Kid” as a child — helped him through when he learned the terrible news that he had colon cancer.

“I was very fortunate because within a few days, I was able to get an appointment scheduled at Sloane, and we quickly understood this was curable,” said Rozen. “I wasn’t going to die, or at least I shouldn’t die. Then it became all about attitude, but I also knew I’d be going through some horrible times.”

As he expected, Rozen’s positive attitude was thoroughly tested throughout his 20 weeks of chemotherapy and radiation treatments.

“There were days when I did not feel positive,” he admits, “and there were days I didn’t say a word to anyone. But those were situational moments, based on chemicals flowing through me. I knew it was all for a greater good.”

Throughout his treatments, Rozen insisted on maintaining normalcy in life. He didn’t miss a day of work and continued biking, even participating in a 65K ride which raised $10,000 for cancer research. He also made sure his wife and two children were part of the treatment process, bringing his son and daughter to his chemo treatments.

But Rozen had another big step on his road to recovery. Though he was clinically cured, there was no proof the cancer was completely gone, so he opted for surgery to have 1/3 of his colon removed — another proactive decision that helped save his life. More cancer was found in the nearby lymph-nodes, which were removed as part of the operation.

“Having the surgery was a no brainer,” said Rozen. “I’m young and I’m making sure I’m around for my wife, kids and myself.”

Today, Rozen says he has a new appreciation for living. He continues biking around his home in Connecticut, travels extensively for work and feels transformed by his cancer journey.

“I’ve become more empathetic, and I take more time now for life,” said Rozen. “I’m not in the first in, last out mindset everytime. Sometimes, I might be the second in to take more time for myself.” While his most recent scans continue to show he’s cancer-free, Rozen is dedicated to help raise cancer prevention awareness, especially among people in their 20s and 30s.

“We need to start spreading the word for younger people, the influencers, the people who don’t watch TV,” said Rozen, who worked on the 2018 Stand Up To Cancer Digital Live Show. “I am really excited to see Stand Up getting involved in this way, to find new avenues to talk to younger generations impacted by cancer.”

Rozen reflected on his cancer diagnosis on his 45th birthday, March 1, for The Mighty. Read his story here.