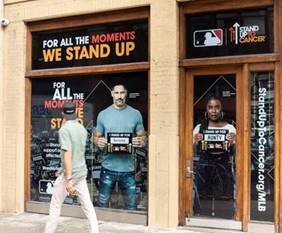 Matt Damon, Jordana Brewster, and Joe Manganiello were among the Stand Up To Cancer Ambassadors featured in the latest collaboration between SU2C and its founding donor Major League Baseball.

On July 9, SU2C launched a new public service awareness (PSA) campaign — titled “For All The Moments We Stand Up” — in collaboration with MLB during the 2019 MLB All-Star Game Presented by Mastercard.

The campaign centered on the classic, lighthearted touch points in baseball, before culminating with the now-iconic SU2C placard moment when tens of thousands of fans, players, managers and other on-field personnel stand for a moment of silence in support of a loved one affected by cancer.

In addition to Damon, Brewster and Manganiello, the PSAs featured ambassadors whose lives have been touched by cancer in some way, including Uzo Aduba, Zachary Levi and Candice Patton. The broadcast PSA also includes Connor, a Ewing sarcoma survivor, and Marshella, a breast cancer survivor. You can watch the PSA by clicking here.

Media interest in the star-studded PSA was phenomenal, with coverage including an exclusive behind-the-scenes segment on Entertainment Tonight, as well as stories in Adweek, Men’s Health, The Boston Globe, MSN and The Morning Call en Español, among others.

Since it launched, the PSA has been widely distributed in major print, broadcast, digital and out-of-home outlets. You may have seen the PSA in Sports Illustrated, Parade, Forbes, Vanity Fair, Vogue, WSJ. Magazine, People or People en Español, or splashed on billboards in Times Square or in storefronts such as this one on Houston & Lafayette in New York City (pictured).

A social media campaign, which included a friendly challenge of National League vs. American League Facebook fundraisers, in support of the MLB PSA generated 1.3MM impressions and 33.7K engagements, which contributed $25K in total online donations.

You can see the PSA here.