Taking on the Childhood Cancer Bully - Stand Up To Cancer

Taking on the Childhood Cancer Bully

When Trevor Schaefer first learned he had cancer at the age of 13, he knew he would have to be brave and stand up to the disease. Fourteen years after he defeated his own “cancer bully,” Trevor is determined to help all pediatric cancer patients defeat their bully too. 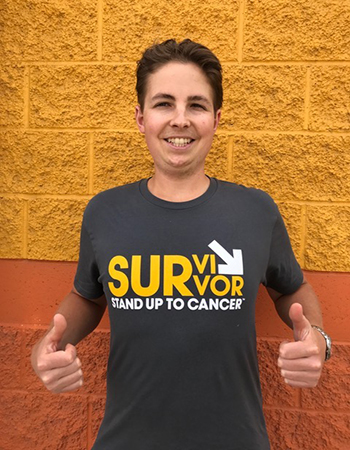 Trevor faced medulloblastoma, a highly malignant form of brain cancer. Brain and spinal chord tumors are the second most common cancers after leukemia in children, accounting for an estimated 1 in 4 childhood cancers according to the American Cancer Society.

“I lived in a small town with my mom and began experiencing headaches on a daily basis,” Trevor recalls about the time leading up to his cancer diagnosis. “At first, we just attributed the headaches to allergies.” When they became more frequent and so painful that Trevor was often too sick to go to school, his mother knew there was a more serious issue. At his mother’s request, Trevor underwent further testing, and a brain tumor was discovered.

“Trevor began an aggressive form of treatment to fight his disease. He lost his hair and eating became a challenge, resulting in an almost 30-pound weight loss. Treatment was isolating, so Trevor began to keep a journal to help express himself and put his feelings down on paper. “That is when I started referring to cancer as a bully,” he says. “It was a bully that I wanted to stand up to and defeat.”

“When he was about halfway through treatment, Trevor began noticing just how many children and their families face cancer every day. After accidental injuries, cancer remains the leading cause of death for children under the age of 14. In 2016 alone, an estimated 10,380 children 15 and under were diagnosed with cancer, according to the American Cancer Society. These are the kinds of statistics Trevor became determined to change.

Today, at the age of 27, Trevor is still using his voice to stand up for all kids and their families facing cancer through the Trevor’s Trek Foundation. “There is so much that the general public does not know about facing cancer as a child,” Trevor says. “I’m passionate about bringing issues to light, like supporting research dedicated to the prevention of childhood cancer through Trevor’s Law and research focused on non-toxic treatments with fewer side effects, which will help more children survive.”

Survival rates for childhood cancers continue to rise with treatment advances over the past few decades, such as the recent FDA approval of the new CAR T Cell Therapy supported by research conducted by the SU2C-St. Baldrick’s Foundation Pediatric Dream Team, among others. More than 80% of children with cancer today will survive five years or more. With continued research, Trevor hopes that more non-toxic treatments will become available to allow more childhood cancer patients to become survivors who continue to thrive as adults.

“One of the things I think many people don’t realize is the lasting effects that cancer can have on childhood cancer survivors,” Trevor states. According to the American Cancer Society, follow-up care and enhanced medical surveillance are required for childhood cancer survivors because of the risk of complications that can occur many years after treatment has ended. “I deal with significant vision and hearing loss and impaired memory as a lasting side effects of my cancer and treatment,” Trevor shares. “I’m thankful that I have done as well as I have in the aftermath of cancer, but I hope to generate more awareness for childhood cancer survivors and the potential problems they may face years after they are pronounced cancer-free.”

“Ultimately, my goal is to give a voice to pediatric cancer patients and survivors,” Trevor says. “I stand up for every child diagnosed with cancer because cancer is the worst kind of bully, and we all need to stand up together to silence it for good.”

Shop the merch Trevor is wearing above (and more) at the SU2C shop.